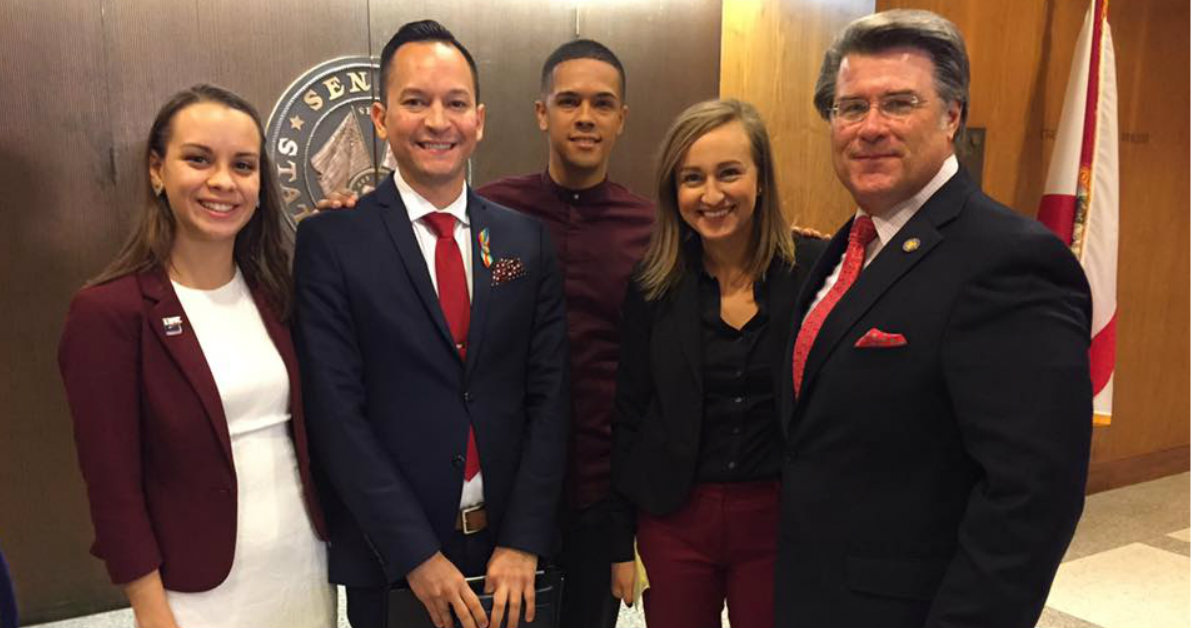 “What does this bill do? It requires all firearm sales be conducted by a licensed firearms dealer,” Farmer said.

“If you are a domestic violence offender, if you are someone with a checkered criminal past, if you are someone who is mentally unstable, what are you going to do? You’re going to wait for a gun show, where there is no background check. That is simply wrong.”
Rep. Bruce Antone, D-Orlando, has introduced similar legislation in the Florida House.
The Florida Coalition To Prevent Gun Violence is committed to fighting the plethora of dangerous gun bills that have been filed and put our residents in certain danger. Part of the battle is exposing the NRA’s lobbying efforts to influence legislation.
“The time has passed when the NRA in Florida goes without significant challenge,” said Patti Brigham, co-chair of the Coalition and 1st vice president of the Florida League of Women Voters. “Recent polls have shown that the majority of Floridians favor responsible gun legislation. We will continue to remind our lawmakers that they were elected to represent the voters, not special interest groups.”
Rep. Carlos Guillermo Smith, D-Orlando, acknowledged there’s no easy answer to the epidemic of gun violence in our city, state, and nation.
“No single proposal can be the end-all solution to gun violence,” he said. “But we reject the idea that the way to stop gun violence is with more guns. That just doesn’t make sense, and it’s not the opinion of a majority of Floridians. It’s the opinion of the gun lobby.”
Equality Florida is also a vocal proponent of gun safety legislation and a Coalition partner. Hannah Willard, its Public Policy Director, applauds Farmer and Antone’s efforts.
“More guns should never be the solution to gun violence, and we are eager to see this common-sense policy become law in Florida to keep all of our communities safe,” she said.
Angie Gallo, the Florida PTA’s legislative chair, agrees.
“The Florida PTA firmly believes that we need common-sense gun legislation in the state of Florida that will protect our children and youth from gun violence,” she said.
In light of the recent gun violence tragedies in our state, leaders in Tallahassee can no longer ignore the mandate they have to keep their residents safe, said Carol Rescigno, President of the Brady Campaign’s Sarasota Chapter.
“I commend Sen. Farmer and the Florida Coalition to Prevent Gun Violence for the recent introduction of this bill to expand Brady background checks to all gun sales in Florida,” she continued. “There’s no question states that have expanded background checks are safer for citizens and law enforcement alike.”
The Coalition was created by the Florida League of Women Voters after the Pulse massacre that killed 49 people and left more than 50 injured. It includes such diverse groups as the Florida PTA, Hispanic Federation, National Council of Jewish Women, and the Interfaith Council of Central Florida.
“As an Orlando native I can say with confidence that we have found power in our pain, and within a matter of just a few days, this coalition was launched,” said Anna Eskamani, senior director of public affairs and communications at Planned Parenthood of Southwest and Central Florida. “Today over 120 non-partisan and non-profit organizations are standing in solidarity, not just with a unified voice, but also with a unified vision, to reduce and prevent gun crimes, injuries, and deaths.”
Share this article...