Home » News » Featured on Home Page, What We're Doing, Who's Doing It, Why We're Doing It » Mother, Surgeons, Talk about Pulse Shooting at Coalition Fundraiser 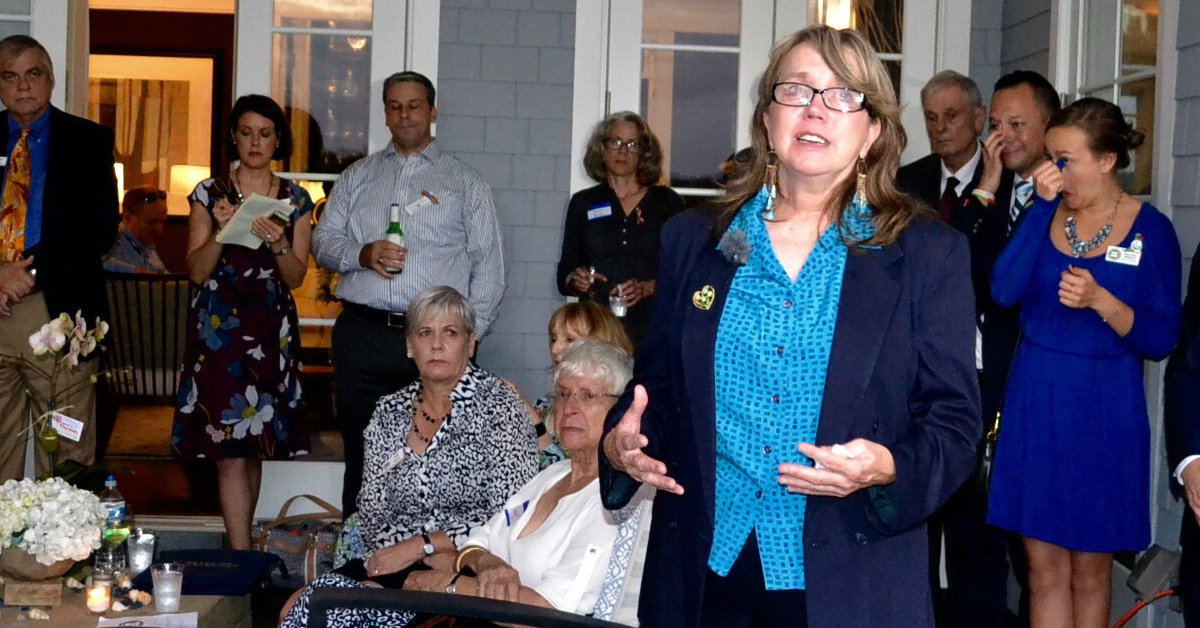 A mother whose son was killed in the Pulse nightclub shooting and two surgeons who treated victims shared their stories on Friday night at an Orlando fundraiser to support common-sense gun control laws.

“Power, Purpose & Policy: An Evening to Prevent Gun Violence” was sponsored by the Florida Coalition to Prevent Gun Violence, led by the League of Women Voters of Florida. Nearly $15,000 was raised by the end of the evening, with more expected to pour in, according to Pamela Goodman, president of the statewide League. The goal is to advocate for state legislators to ban assault weapons and strengthen background checks, as have a number of other states.

The absurdity of our gun laws and culture were brought home by Christine Leinonen, whose 32-year-old son, Christopher, and his partner were killed at Pulse.

“He was shot nine times,” said Leinonen, a lawyer and former police officer. “When I was in law enforcement, I had to go through weapons training four times year,” she said, noting the guns she carried were far less powerful than the assault weapon used at Pulse, which killed 49 people in the most deadly massacre in modern U.S. history. “But he could just walk into a store and buy this powerful assault weapon.”

“This is solvable,” she continued, “through common-sense gun control measures.’’

Leinonen also has a message for the NRA and others who fight reasonable measures by citing the Second Amendment without acknowledging the spirit of its intent.

“I love the U.S. Constitution. I love everything about it – every period, dash and comma – including the Second Amendment,” she said. “But read the first four words of that amendment: “A well-regulated militia …”

Dr. Marcus Levy, a pediatric surgeon at Orlando Health, and Dr. Joshua Corsa, senior surgical resident at ORMC, experienced the aftermath of the shooting from a very different perspective than Leinonen, but their stories were no less moving. The screaming, the blood, the suffering, the sheer numbers, will stay with them forever, they said.

Levy, who noted that all of the victims who had surgery survived, treated victims during the first wave of treatment, meaning those who made it to the hospital before law enforcement entered the nightclub. Since that night, he’s been gathering statistics on how the United States has spent millions, even billions, of dollars on safety concerns in other areas to great effect. But no such efforts are being made on gun control. For instance, over the decades, the U.S. has seen escalating regulations on seat belts, braking systems and airbags for cars. But no such efforts or funding are being made toward gun safety.

Maybe if people in power had seen what Levy did when he stepped out of the hospital, things would be different.

Corsa became one of the faces of the Pulse tragedy when he chose to wear his blood-soaked shoes from that night until the last hospitalized victim was healing. He worked for 30 hours straight, through the first and second wave.

“It was the worst day of my life. But I saw a lot of courage, the courage of survivors.”

He also noted, however, that day-to-day, assault-style weapons are killing and maiming people in our community. It is, in fact, so common that it doesn’t get news coverage. He pointed to a recent incident where 11 people were shot by these weapons in Orlando within 12 hours.

He called for rational discourse on the issue of gun control, saying, “It leaves holes in bodies, holes in families and a hole in our community.”

The Florida Coalition to Prevent Gun Violence was developed after the shooting and quickly grew to include more than 100 local, state and national organizations. It includes such diverse groups as Equality Florida, Quakers of Orlando, Hispanic Federation, Interfaith Council of Central Florida, Campaign to Keep Guns Off Campus, Florida PTA, and Doctors for America.