Home » News » Featured on Home Page, What They're Saying About It, What We're Doing, Who's Doing It, Why We're Doing It » The Florida Coalition to Prevent Gun Violence, lawmakers and Pulse survivors join to support ban on assault weapon sales 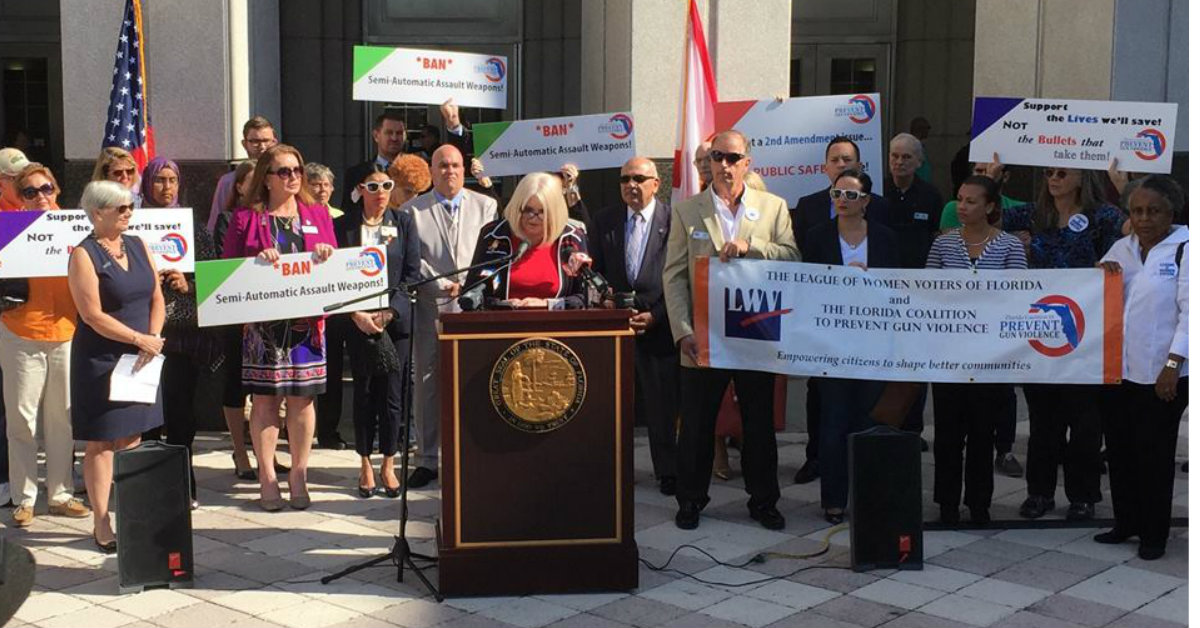 Several Pulse survivors joined Orlando lawmakers and gun reform advocates on January 5th to make the case for a bill that would ban the sale of assault weapons and large-capacity magazines in Florida.

State Rep. Carlos Guillermo Smith and Sen. Linda Stewart, both Orlando Democrats, filed bills that make it a third-degree felony to sell or possess an assault weapon or large-capacity magazine, with exceptions that include one for gun owners who purchased a weapon before the bill is potentially passed.

“Assault weapons are the gold standard for mass murder. They are weapons of war, designed for war and have no place on our streets or in civilian hands,” said Smith. “We all have the right to defend ourselves and our families with a firearm, but nobody needs military-style assault weapons to do it.”

Pointing a finger at the gun lobby and what he called its “stranglehold on Tallahassee and their extreme agenda,” he added, “It’s time we take back the conversation with a bold, comprehensive and common-sense approach to gun safety. This legislation is just the beginning.”

“If not now, when?” asks Stewart. “We don’t need any more tragedies like Pulse.”

The bills target the type of weapon used in June’s Pulse Nightclub shooting, which killed 49 people in the deadliest U.S. shooting in modern history.

The Florida Coalition to Prevent Gun Violence, initiated by the League of Women Voters of Florida, was created after the Pulse massacre to promote smart, common-sense gun legislation and helped set the course for the legislation being unveiled today.

The Coalition quickly gained momentum and has grown to include more than 100 local, state and national organizations. It includes such diverse groups as the Hispanic Federation, Interfaith Council of Central Florida, Campaign to Keep Guns Off Campus, Florida PTA, and Doctors for America.

In addition to pushing for a ban on assault-style weapons, the Coalition also calls for comprehensive universal background checks.

“We are no longer going to allow the NRA to dictate gun laws in Florida,” said Patti Brigham, Co-chair of the Coalition and 1st Vice President of the League of Women Voters of Florida.

“Florida cannot wait nor do we have to wait for our federal government to take action. We can and should follow the lead of seven other states that already have in effect what we are proposing today,” Brigham said, adding that ordinary citizens do not need weapons such as the Sig Sauer MCX, brandished by the shooter at Pulse, to hunt, defend ourselves, or to show them off because we can.

Strong, outspoken support for the Coalition and the proposed legislation comes from a number of diverse groups, demonstrating the far-reaching passion for the assault-weapons ban and the safety of our community.

Not mincing words, Andy Pelosi, executive director of Campaign To Keep Guns Off Campus, said, “Assault rifles, like the one used in the Pulse shooting, where 49 people were killed and another 53 injured, are weapons of war, designed to kill and injure large numbers of people in a short period of time.” He added that the state legislature should immediately act on the proposals unveiled today.

Also strongly supporting the proposed legislation is Equality Florida, an organization dedicated to securing equality and justice for the LGBTQ community. It was an early member of the Coalition.

The Rev. Bryan G. Fulwider, CEO of Building US and a member of Friends Talking Faith With The Three Wise Guys on WMFE, says faith “leads us in the way of peace.”

“We recognize that people of faith may differ on the way we feel about guns, individually. Nevertheless, honest faith leads us to foster and build a more peaceful community and society,” he continued. “Military-style assault weapons are not part of creating a more peaceful and safe community. They have only one purpose, mass casualty shooting. These weapons may be a tool of war, sadly, but they have no place in a society and community committed to creating peace and safety for all people,” he said.

The Florida PTA, also a Coalition member, likewise applauds the efforts of Stewart and Smith.

“Given the history and tradition of strong support for the safety and protection of our children and youth, and with the desire to encourage common-sense legislation that can potentially prevent future tragic scenarios involving our most precious resource, Florida PTA offers unwavering support banning the sale and possession of military-style semi-automatic assault weapons,” said Angie Gallo.